Welcome to your guide to Royal Ascot. The Royal Ascot in Berkshire is one of the most famous horse races in England, not least because it attracts all of England’s high society.

The Royal Ascot has a worldwide reputation and attracts the best horses. It is also synonymous with elegant dress, sophisticated fashion and beautiful millinery. From the arrival of the Royal Parade as the clock strikes twice, to the singing of the crowd around Ascot’s bandstand, each of the five days of fun and tradition to be enjoyed on the racecourse or from home is an event that has to be seen to be believed during June.

A highlight of the British racing calendar, Royal Ascot has approximately seven races per day for a total of 35 races. And to enjoy it even more, it is advisable to adopt the dress code! At Royal Ascot, spectators dress in their best clothes and wear spectacular hats to participate in this very British tradition… Photo by John Mitchell is licensed under CC BY 2.0

The origins of horse racing in Britain date back to the 1100s, when the first Arabian stallions were brought to the country by English knights returning from the Crusades. In the centuries that followed, these elegant creatures were bred locally and crossed with local breeds. It is their offspring that we see running at the racecourse.

Ascot Racecourse was opened over 300 years ago by Queen Anne, a great horse lover. It has been patronized by many monarchs, including Queen Elizabeth. The Summer Meeting received its royal title in 1911 and over the years has become one of the most anticipated sporting events, combining elegance, heritage, chivalry and tradition. With 5 days of high quality events, Royal Ascot is the highlight of the British horse racing season.

For the British, Royal Ascot is the official opening of the summer. Several horses owned by Queen Elizabeth II compete and some privileged jockeys wear her colours.

But why the Royal Ascot so famous ? Because it is the Queen’s favourite race. But also because Royal Ascot combines tradition, royalty and extravagance. And these are also the three things that best define these five days.

Of course, the protagonist of these 5 days is the Queen, but so are the hats and fascinators of all the ladies who attend the event. It is a real fashion show. Of course, respecting a strict dress code in which the wearing of headgear is compulsory, the shoulders cannot be uncovered, and the length of the dress cannot go much higher than the knee.

Royal Ascot is one of the busiest weeks of the year for bookmakers, rivalled only by the Cheltenham Festival and the Grand National. There are always great offers from bookmakers for new customers, including improved odds, better guaranteed odds on the big favourite races. The colour of the clothes the Queen comes in every day generates expectations. It is even part of the daily betting on the racetrack.

On the first day of the event, Queen Elizabeth arrives with the rest of the British Royal Family. A real sight to see! Then the horse racing begins. On this first day, the Queen Anne Stakes, King’s Stand Stakes and St James’ Palace Stakes are run.

The third day of Royal Ascot is the traditional Ladies Day. You may have seen this before, as it is what Royal Ascot is known for. Everyone wears beautiful costumes and hats and the horse racing takes second place. That’s not quite true… On this day, the Gold Cup is contested. A prestigious prize among jockeys and trainers.

On the fourth day, 6 first class races will be run. These include the Coronation Stakes, the Commonwealth Cup and a number of “Group 2 and Group 3” races with exciting handicaps.

The final day of Royal Ascot again begins with a Royal Procession. In addition, a number of races are organised. These include the Listed Chesham Stakes, the Diamond Jubilee Stakes and, as the last race of Royal Ascot, the Queen Alexandra Stakes.

To watch the Royal Ascott in real life you have the Royal Privileged Space
It is not easy to be part of the exclusive elite that stands alongside the royals in the Royal Enclosure. It is an extremely select club of friends. Access is restricted to those invited by a representative of Her Majesty. To receive this invitation, you must be ‘recommended’ by another person who has been attending the races from this privileged space for at least four years.

If you can’t get into the privileged royal area, you can opt for the Queen Anne’s Enclosure, which gives access to the parade ring. But she also has her own dress code: suit and hat for women; suit and tie for men… and ankle socks! 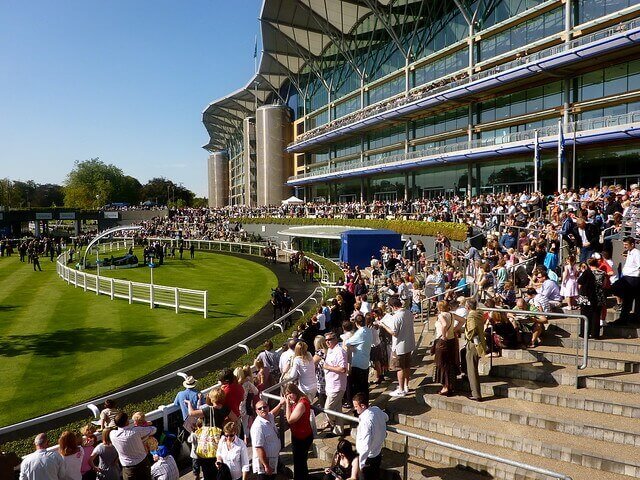 The atmosphere is a little more relaxed on the Windsor site: there is no formal dress code. Spectators in this part of the racecourse have the privilege of being the first to see the cars arriving with the Royal Family. This is the area on either side of the mile-long approach to Windsor Castle. And finally, we have the village enclosure, on the moor, right in the middle of the racecourse. This is a much more festive, boisterous or noisy environment. It allows you to eat outdoors, listen to music and have a privileged view of the grandstand and the racecourse. Despite this more streetwise feel, don’t forget the famous dress code: similar to Queen Anne’s Hall, no shorts, jeans or anything else!

The privilege of attending Royal Ascot is reduced to the payment of an entrance fee of approximately €400, which allows us to watch the races from slightly less privileged parts of the racecourse and to savour the atmosphere of this unique event.

In the UK, all races and the opening show are broadcast on Sky Sports Racing, ITV and ITV4, allowing many households to adopt the dress code while watching the event at home! Globally, the event is broadcast to approximately 200 countries and will be accessible to over 650 million homes, making it a good idea for horse racing fans to plan a trip to the UK. If you’re outside the UK this week and want to follow your bets or just watch classes, you can always use a VPN to connect without being geo-blocked.