The Ascot Racecourse was founded in 1711. It was Queen Anne who founded the Ascot racecourse and since then, it’s become one of the premier horse racing tracks in Britain and the world. The first race, “Her Majesty’s Plate”,  was held on 11th August 1711. Seven horses competed. This first race comprised three separate four-mile (6437 m) heats.

It’s believed that Queen Anne rode her horse from Windsor Castle to the field where Ascot racecourse now sits and said “ this wold be a fine place for a horse race”. It didn’t take long for that statement to become reality, with the first race held later that year in 1711.
With Queen Anne’s death in 1714, this caused the cancellation of races the following month at the new track – with racing not resuming there until 1720. This was due to her successors – George I and George II not showing an interest in horse racing. It wasn’t until George II’s third son – William Augustus, the Duke of Cumberland, who was a keen sportsman – revived the Ascot track.

In 1785 the Ascot racecourse took another step forward when the Straight Mile part of the track was built, and this attracted quicker horses that could now run over trips that ranged from five furlongs up to a mile – creating a lot more races and opportunities for speedier thoroughbred horses.This was nothing like the Royal Ascot meetings we see now. To start with, only seven horses competed, with three different heats of four miles each and every horse carrying 12 stones. The first racecourse was designed by William Lowen, though he was helped by a team of experts in various fields, across painting, carpentry, and administration.

Decades later, the first permanent building was built by a specialist from the area, in 1794. This structure was fit to accommodate over 1,600 people, and saw regular use for around 50 years.

Parliament took a decisive part in Ascot’s future in 1813, when they passed the Act of Enclosure. This ruled that Ascot Heath would be maintained only as a public racecourse, ensuring that events could entertain the British populace without fear of the venue being commandeered for any other purpose.

The Royal Ascot Meeting title though dates back to 1825, when racing at the track during the third week of June became known as ‘Royal Week’. Since then members of the Royal family started attending the meeting with a horse-drawn procession still taking place before the horse racing starts – a tradition that still takes place to this day. This helps to attract the thousands upon thousands of spectators each year. Being able to see the British monarchs in person, in a formal setting, is a rare thrill for many people.

The sense of spectacle and British tradition ensures visitors come from across the globe, while millions more watch on television and online.

While the first race was held in 1711, the first Royal Meeting as we know it today (or, rather, as close to it as we can imagine) took place in 1768. The arrival of the Gold Cup, decades later in 1807, ushered in the event’s more modern structure, and Royal Ascot was the only fixture held at the racecourse for over a century, until 1939. It was in this year that additional events started to take place at the venue throughout the year, making broader use of Ascot’s facilities.

In 1970 we saw the introduction of the famous Ascot bandstand – a place that racegoers go after racing for a proper ‘English sing-song’. This was an idea from the wife of the clerk of the course at the time and has grown in popularity ever since. It’s next big overhaul was in 2004, when the track closed for two years with a £200 million redevelopment that saw the Royal Meeting re-route to York during this time. 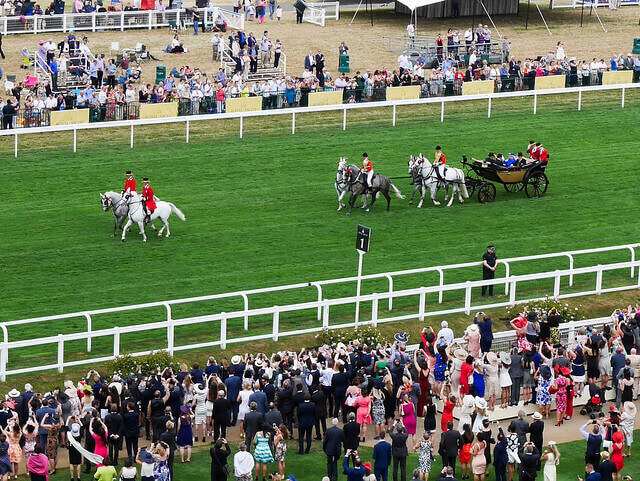 Around 300,000 people attend Royal Ascot each year and with many attractions before and after the horse racing to keep racegoers interested then these numbers are only set to increase in the coming years. In the current age there is over £7.3 million in total prize money on offer, which makes the meeting the most valuable on the annual horse racing calendar each season. It currently stages eight Group One races over the five days.

Over the years the track developed but it was in 1961 that the Ascot track got a major facelift with the new Queen Elizabeth II Grandstand being built at a cost of £1million. This contained 280 private dining rooms and saw the first boom of the corporate hospitality boom in horse racing and other top sports.